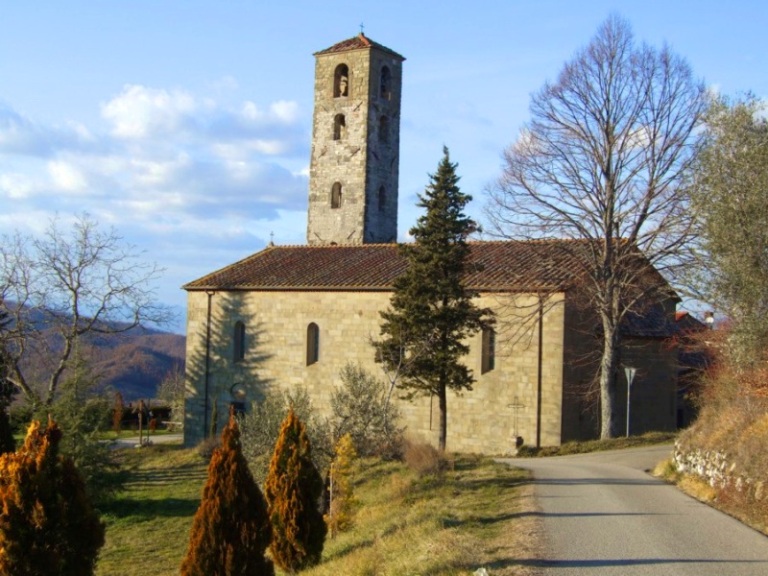 San Cresci is a lovely Romanesque-style church just a 30-minute walk down the road from the Villa Campestri estate, dedicated to the early Christian martyr Cresci. Associated with Minias, another saint important to early Florentine history, Cresci is credited with healing sick children and introducing the Christian religion to the Mugello region. So why not take a walk while you’re visiting, right into the pages of local history?

Cresci arrived in Italy from Germany in the 3rd century A.D. and was shortly thereafter befriended by Minias. For practicing the emerging and as yet unrecognized Christian cult—and refusing to acknowledge the Roman gods—the two were arrested, with Minias put in the Florence arena to face the lions. According to legend, the lions left the devout Minias unharmed, and thus to satisfy the Roman audience, Minias was beheaded before the viewing public. Cresci, on the other hand, was placed in prison, where he encountered a guard named Ognone, whose sick child Cresci healed. Ognone  converted, freed Cresci, and the two along another prisoner named Emptius escaped to the rural country outside Florence, specifically to a place known as Valcava, right here in the Mugello.

The three encountered a poor country woman named Panfila, who offered them food and a place to rest. Panfila, too, had a sickly child, a son named Serapione, whom Cresci also healed after Ognone encouraged the pagan Panfila to convert. Cresci then baptized Panfila as well as the boy, renaming him Cerbone. Word about the miraculous healing spread, and thus slowly locals came to know and convert to the new faith.

As news about these events travelled, the Romans soon tracked down the escapees. Ognone and Emptius were promised reprieve if they acknowledged the Greek god of medicine and healing Aesculapius over Cresci (archaeological evidence such as Roman-era coins, carved stones, and animal bones found on the site suggest there was in fact a pagan temple here prior, perhaps one dedicated to the god of healing). Refusing, the two were whipped and stoned to death. Cresci was then taken and beheaded, his head mounted on a spike to be carried back to Florence. Panfila and Cerbone managed to hide while these dramatic events unfolded, yet shortly after they, too, were also martyred.

The legend of Cresci does not end here, however. After travelling a short distance with Cresci’s head, the Roman soldier carrying it became exhausted from its inexplicable weight. The head fell to the ground and could not be moved. It was on this spot that Cresci, Ognone and Emptius were buried and afterwards the church built, one of the first in the Mugello. Today San Cresci houses some of the saint’s relics, and inside there is a fascinating Crucifixion, depicting Christ on a tree with a skull at the base, which art and architectural historian David Mayernik has described as “[growing] from the ground of both the Mugello and Golgotha (which means ‘skull place’ in Hebrew), referring to the Tree of Jesse.”

San Cresci was severely damaged in the powerful earthquake that hit Mugello in 1919, and has since been restored.

Excursions on the Calvana di Prato

Calvana is a mountain range of the Tuscan-Emilian Apennines characterized by reliefs with heights between 700 and 916 meters. The chain is about 15 kilometers long and extends from the Prato plain to the Mugello valley. The limestone massif offers lovers of mountain walks, several roads where they can test their skills along the mountain […]

We know that many writers went to “rinse their clothes in the Arno”, especially during the Risorgimento, to give all of Italy the dialect spoken by Dante, Petrarca, Boccaccio and colleagues. Basis of the Italian language, can the Tuscan dialect still be considered a dialect? And what are the curiosities related to our language? We […]

Tuscany is perhaps the most famous Italian region in the world, known for being the cradle of the Renaissance, of the art of culture. We all know what to see in Florence, what to do in Versilia and Maremma and we remember Pisa with its leaning tower. However, if we analyze Tuscan cuisine, famous dishes […]

Tuscan summer: what to do and where to go

The summer months are generally accompanied by an irrepressible desire for trips out of town and holidays. Precisely for this reason we want to offer a little help in deciding what to do and where to go during the summer, focusing on a particularly rich region both from a naturalistic point of view and in […]

Everyone knows Mugello, often mentioned also for motorcycle and formula One races, but also because it is one of the most suggestive valleys in Tuscany, located north of Florence. It is an enchanting environment, modified by man for centuries, full of perfectly preserved small villages of medieval origin. Let’s see which are the main ones […]

Florence, the florid city (from the Latin Florentia), is one of the most loved cities in Italy and all over the world thanks to the artistic, cultural and architectural prosperity that cover the city in every corner. Once in a lifetime it is a must to visit the city, the flagship of the Renaissance, and […]