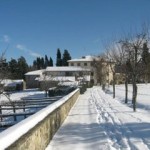 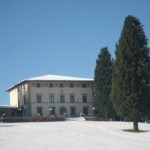 The winter is quiet and restful in Tuscany: nature seems to sleep for a few months. But even in this period Tuscany offers initiatives and activities for your vacation. Especially in the winter, festivals in Mugello are dedicated to good food: after the autumn, characterized by olive and grape harvest,  new olive oil and wine tastings begin.During Christmas time, towns and villages in Mugello are colored with lights and decorations, becoming particularly charming. There are also many Christmas markets that can be found in the area, starting with those of Marradi and Palazzuolo sul Senio.

In February, don’t miss the Carnival of Borgo San Lorenzo, with large colorful floats, music and masks, until the day of Berlingaccio with the big closing party.

The season is also good to visit the Medici Villas and Castles of the territory, as well as the sights of nearby Florence: just dress warm cloths and have long walks in the hills and trails, enjoying a little peace and relaxation.

In recent years the snow characterize the winter landscape of the Mugello, so it is not unusual to wake up and find yourself surrounded by a white cover, especially during the months of January and February.

In this time of the year Villa Campestri Olive Oil Resort is closed for a few months of rest, reopening on March 23rd 2012. If you’re interested in staying at our property next year you can already see our special offers page!

Populonia: the Etruscan city on the sea

On the Maremma coast of Tuscany, near Piombino, overlooking the Gulf of Baratti we find Populonia: the Etruscan city-state forming part of the Dodecapoli located in Etruria, the only one of the twelve Etruscan cities overlooking the sea. During the entire period of Etruscan splendor, Populonia never experienced a crisis, continuing to develop thanks to […]

Beautiful sea in Tuscany? Here’s Where To Go

Tuscany is not only a region rich in cultural and artistic heritage and good food, but it also has 633 kilometers of coastline and makes up 8% of the Italian coasts. Most of the coast is suitable for swimming and there are also marine parks. According to the assessments of Legambiente and the Touring Club, […]

Tripe is an ingredient that was widely used until not many years ago, by some even considered a real delicacy, which today is often forgotten, with the exception of some typical trattorias scattered throughout Italy. We are talking about tripe, that is the stomach of pigs and cattle. The most used is the rumen of […]

Piero della Francesca in Arezzo: an Itinerary to discover the Master’s Works

Piero di Benedetto de’ Franceschi, more commonly known as Piero della Francesca, was one of the most important exponents of the Italian Renaissance and humanist painting of the time. Also famous for his excellent mathematical and geometric skills, he brought a profound innovation to painting and therefore to art in general: perspective, an artistic style […]

Imagine a dark lily that stands out against a white coat of icing sugar. Where could you possibly find yourself if not in Florence? And that’s not all: because the Florentine Schiacciata is the Florentine sweet of Carnival par excellence, known in every Tuscan city. Although it is a simple, popular recipe, born as an […]

Chianti Areas: What They Are and What to See

The Tuscany region is rich in places of interest, from cultural to maritime ones, also passing through gastronomy, and among these we can also find the Chianti areas. By hills of Chianti, or also called Monti del Chianti, we mean an area that extends more than 20 km, between the provinces of Siena, Florence and […]

Trattorias Florence: History, Curiosity and List of the Best

The city of Florence has always been famous for its artistic and cultural heritage and was also the capital from 3 February 1865 to 3 February 1871. Another important tradition of this city, and of Tuscany in general, however, are also the typical trattorias. These are convivial places in which to eat well, which were […]

Monteriggioni: what to see and where to eat

In the heart of the “Montagnola Senese”, a hilly area that embellishes the hinterland of the province of Siena, stands a village that seems to have stopped in the time of fairy tales. Monteriggioni, a few houses surrounded by a circular wall dotted with watchtowers. From above it looks like a castle of enormous dimensions, […]