Recipe is for one serving.

Marco explained this dish as a variation on American bacon and eggs for breakfast—but he served it as a first course for lunch. (I could also see this as a terrific supper dish, maybe with an abundant green salad on the side.)
He used one fresh organic free-range egg, olive oil from this year’s harvest, barrel-aged apple vinegar, Maldon salt, and a slice of a pancetta called tarese that comes from the region around San Giovanni Valdarno and is cut from very large pigs to make very big slabs of “bacon” that are then aged for 60 to 90 days.

He heated oil in a sauté pan, then put a ring mold in the pan and added the egg white. While it cooked, he arranged the rest of the ingredients. When the white was set, he removed it from the heat and laid the yolk in the center, so that it would warm and thicken in the residual heat of the egg white. He transferred that with a spatula to a heated serving dish, then combined the oil with half its weight in vinegar and a pinch of salt, whisked that to an emulsion and poured it over the egg, topping it with a very thin slice of tares.

A simple Tuscan egg recipe that will impress any guest! 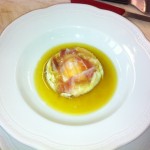 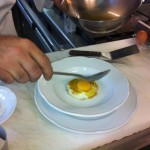 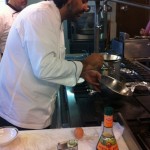 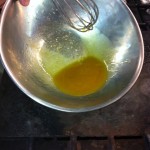 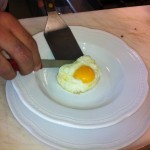 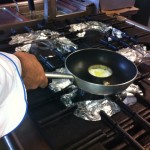