Baked ribollita: ingredients and preparation of the typical Tuscan dish 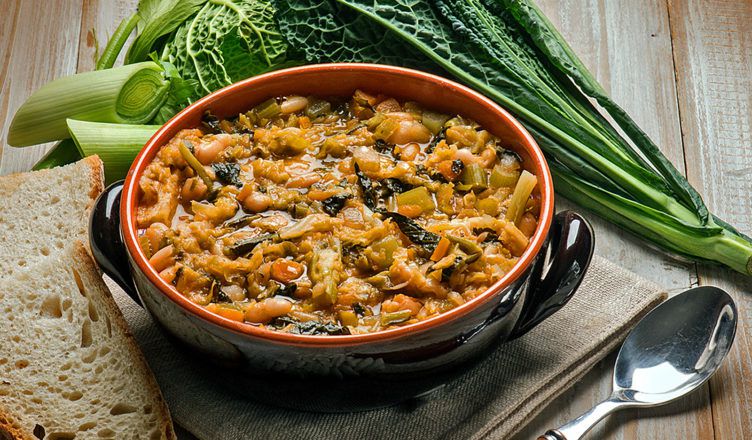 Ribollita, together with Fiorentina steak, is certainly one of the most famous and appreciated dishes of Tuscan cuisine. Discover with us its origins and the famous recipe of Baked Ribollita!

How Ribollita was born

The term Ribollita originates from the verb Ribollire which means “boil again”, which suggests that it is a dish of humble origins, as something from the day before had to be reheated.

Ribollita was definitely a “light” dish of the Tuscan farming tradition, made with typical vegetables of the poor cuisine, and that is why the debate on what is its origin and what the original recipe to make it is is always on.

Being a soup of humble origins, made with poor and seasonal ingredients, it has probably always existed since ancient times.

After 1200, Florence assumed a primary role in the economy of Tuscany. At that time there were bitter struggles between the Guelphs and the Ghibellines and the economic commitment was all about arms. So even the kitchen of the wealthiest was basically based on bread: this was the period of the fettunta (bread with oil and salt), of the castagnaccio (focaccia of chestnut flour, pine nuts, oil and rosemary), panzanella, ribollita and a thousand other bread soups.

Over time the bubbled vegetable soup became part of the eating habits of the Tuscan peasants: the day of the soup made of bread became Friday, since in that day it was necessary to eat “lean” and avoid fatty foods and meat.

To avoid waste, this soup was heated even in the following days.

It is such a successful and well-known dish that not only Florence is identified, but all of Tuscany.

According to the traditional recipe, in addition, the ribollita should be cooked in a clay pot and baked in the oven.

In reality it is difficult to say what the original recipe is. In every city, every family and sometimes even within the same family there are different recipes and every one think to have the original one.

The first modern recipe book to bring back the recipe of a Tuscan soup of lean meat to the peasant is that of Pellegrino Artusi.

Even if there is no single recipe, there are fixed points that unite them all.

If you want to taste a truly exquisite Ribollita we are waiting for you at Villa Campestri Olive Oil Resort!