Medici Villa of Trebbio: the World Heritage Site in Mugello 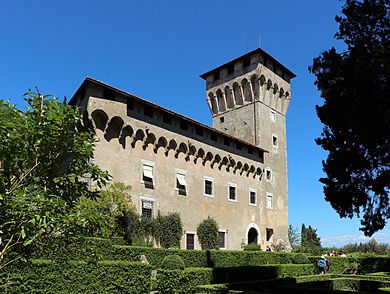 During the 37th UNESCO World Heritage Committee in 2013, the inclusion of the “Villas and Medici Gardens in Tuscany” on the World Heritage List was approved.

The 14 properties have entered the UNESCO list due to their cultural, artistic and landscape relevance. These buildings, mostly built in the countryside, date back to the period from the 15th to the 17th century.

The first villas were built in Barberino del Mugello, the area of origin of the Medici family, and later in the whole of Tuscany. In addition to strategic or residential reasons, the construction of the villas also served to demonstrate the political, commercial and cultural power of the Medici family.

From the initial list of 36 villas and gardens only 14 were selected: the choice was limited to those structures that had the highest degree of integrity. The selected villas are a universal patrimony also for the artistic testimonies that are kept inside them.

The villas in question are 14 and extend into the provinces of Florence, Pistoia, Prato and Lucca.

Medici Villa of Trebbio: the World Heritage Site in Mugello

The Villa of Trebbio, built on the ruins of a Lombard tower, is located in the Mugello, specifically in the municipality of San Piero a Sieve. The position was strategic because it allowed to control the viability of the roads that led to Florence.

It presents an architecture with medieval motifs, with a large square tower and regular openings on the noble floor. The inner courtyard has a glazed loggia with slender columns and an external staircase.

The villa, situated on a hill, overlooks the plain of the Mugello and is surrounded by a medieval-style external walkway.

Unlike the other Medici villas, the Villa del Trebbio still retains a somewhat austere aspect of medieval fortification. This residence was often used to escape from the plague or from the various political crises that in the past afflicted Florence.

Over the years it had various owners until 1930 when it was bought by the Scaretti family, current owners of the villa that still live there.

The Medici villas are attractions that deserve a visit to discover a priceless heritage. To visit the Medici Villa of Trebbio, a World Heritage Site in the Mugello, we are waiting for you at Villa Campestri Olive Oil Resort!