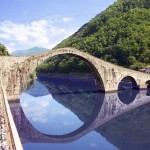 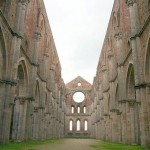 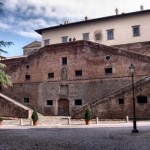 When it comes to Tuscany, it is hard to find a place with more stories than this region in Italy. With so much history to content with, it comes as no surprise that there are several legends that intrigue people to do this day. In our first blog post of 2015, we want to explore these tales and let you know some hidden corners of Tuscany that are much more than just a photo op.

One of our personal favorite legends takes place at a beautiful ruin called San Galgano Abbey, south of Siena. As the legend goes, in the year 1180, a knight left his life of violence and retired to live as a hermit at Montesiepi. One day he stuck his sword in the little chapel  ‘Cappella of Montesiepi’ close to the abbey and it remains there even today, over 800 years later. Sounds like the story of King Arthur? That is no coincidence as many say this legend is the originally inspiration of the English tale that so many of us have grown up listening to. We highly recommend visiting as this is quite a beautiful attraction in Tuscany, immerse yourself under the abbey that has a roof that opens itself into the sky and imagine what it must have been like for a Tuscan hermit with a super skill.

The next mysterious legends is that of a ghost haunting a Medici Villa, named Villa Medicea Cerreto Guidi in a small town close to Florence. According to Discover Tuscany ‘The villa is quite famous due to a legend that surrounds the mysterious death of Isabella dei Medici: it is said that she died at the hands of her husband, Paolo Giordano I Orsini, duke of Bracciano, who strangled her after of a presumed betrayal. Since then, it is said that the ghost of the sad Isabella still roams around the villa seeking peace. The legend attracts many visitors who want to see the bedroom where the alleged murder took place.’

Our last mysterious story takes place in a small hamlet close to Lucca, Borgo a Mozzano. The town can be easy to miss except it has a unique bridge ‘Maddalena Bridge’  with a highly-curved arch, one that you don’t soon forget. This bridge is also known as the ‘Devil’s Bridge’. According to InToscana “According to legend, the bridge was built by Saint Julian who, unable to complete it because of its difficulty, asked the Devil for help, offering him in return the soul of the first living being who crossed the finished bridge. Once the bridge was finished, Saint Julian threw a piece of bread on to the bridge, luring a dog on to it and thereby getting the last laugh on the Devil.” We know the bridge is one of the most beautiful of Tuscany, and makes for an easy stopover on your next trip to Lucca. Also during the month of October, the whole town undergoes a transformation for Halloween. Locals celebrate with special events in the town center which only makes this legend feel a little more real. Get more info on this town and this legend here.