Scarperia, the town of the sharp blade 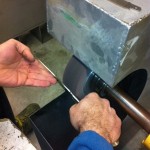 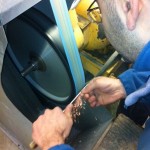 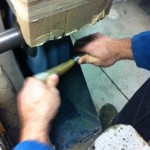 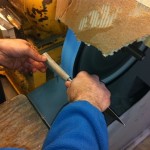 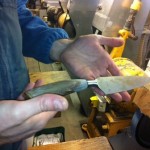 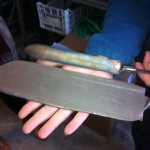 Within short distances from Villa Campestri Olive Oil Resort, many small artisan workshops still thrive, making the Mugello an exceptional area to visit and discover.  Villa Campestri itself is a major Olive Oil Resort, where you’ll share with us the production and refinement, and enjoyment of the best oils.  From our Resort we begin a trip that winds through the hills, between olive groves and vineyards, to discover this magical old world that still exists.Within 15 minutes drive from the villa lies the town of Scarperia, where an ancient tradition of creating hand-made iron cutting tools – knives, scissors, cutlery – is still very much a part of the town’s attractions.  The town itself is worth the visit; before the autostrada to Bologna got built, it was the main trading center of the Mugello,  The massive Palazzo dei Vicari (Vicars’ Palace) with its huge tower dominates the skyline, a Renaissance monument to Medici power.

But it’s the workshops that continue the ancient art of cutting sharp iron tools that brings us to Scarperia.  It is these workshops and their art that has earned Scarperia – a neighbor of Borgo San Lorenzo and Vicchio – its renowned title: Town of the Sharp Blade.  We hear of Scarperia as far back as medieval times; its profession was referred to in 1539, in the Statue of Knifemakers (Statuto dei Coltellinai).   In the document, the profession was strongly regulated, with standardized methods of production and sales. This gives an idea of how important the artisan workshop was, both socially and economically, in the development of Scarperia.

The passage of years has not seen the end of this ancient tradition, or the passion with which it’s undertaken.  Passed from father to son, it has survived to this day, and we still know Scarperia as the town where the sharpest, most acute blades are hand-forged. It’s here in the workshops of Scarperia that you can actually see their creation.

We visited the workshop of Saladini, where we watched the artisans create a beautiful knife from its very beginning.  (You can see it virtually by scrolling the gallery photographs above, or on our Facebook page).  The process is simple: first we chose our handle (in the photo the handle is of olive wood), then selected the rough blade.  Its dimension depends on the kind of knife you want, such as a bread, or perhaps carving knife.  The artisan puts the handle and blade together and proceeds to forge it over the hot fire.  Ecco! The rough product emerges from the flames.

We then proceeded to the shaping of the handle, its polishing (with a piece of denim) and on to the precision sharpening of the blade, then to the final polishing of the iron and the finished product was there for us.  It would normally go on sale in the workshop.

Since 1999 there’s been a museum in Scaperia dedicated to knives, where you can find the history, and also see the evolution of the hand-made knife over the past 800 years.  Il Museo dei Ferri Taglienti (The Museum of Cutting Tools) is located in an old cutlery workshop within the Vicars’ Palace (Palazzo dei Vicari).

If you’d like to participate in the creation of a knife made especially for you, exactly as we’ve described it, we can organize it from Villa Campestri.  It will be a day to discover the ancient art of forging blades, at the workshop of a traditional knife maker.  You’ll watch and understand the fine artisanship of knife-making.  Just to see it is lovely, but it’s also even more beautiful to join in the creation of a personal knife just for you, the result of an artistic and passion-filled tradition.