Diotto: the Celebration of the founding of Scarperia 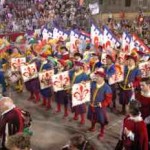 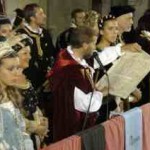 Last week we told you about the Renaissance days, a prelude to Diotto, one of the most important festival of the City of Scarperia, in Mugello. Diotto (Day-Eight) is celebrated on 8th September and remember precisely what happened on the same day in 1306 when the Republic of Florence founded Scarperia, naming Castel San Barnaba, and settling the figure of the Vicar, who held the administrative powers.Each year, the evening of September 8th to 21st, the doors of the Praetorian Palace in Scarperia open to let out the parade: the head is the figure of the Vicar, followed by notaries, ladies, knights, musicians and flag-wavers.

The march arrives to the Vicar Palace where the Vicar plays the most important moment of the festival, the Palio of Diotto.

The Vicar starts the races: the 4 finalists will compete in the districts of knife throwing, “tiro alla fune”, “Palo della Cuccagna”, “corsa sui mattoni” e “corsa sulle bigonce”, very ancient plays. The district winner wins the Palio, which changes every year. To stagger the games is the spectacle of musicians and flag bearers, in the swirl of color and music that brings back to the world of the Middle Ages.

If you want to relive the atmosphere of the Middle Ages in Tuscany, Diotto is not to be missed. If you want to know how to participate, the staff of Villa Campestri Olive Oil Resort is at your disposal.