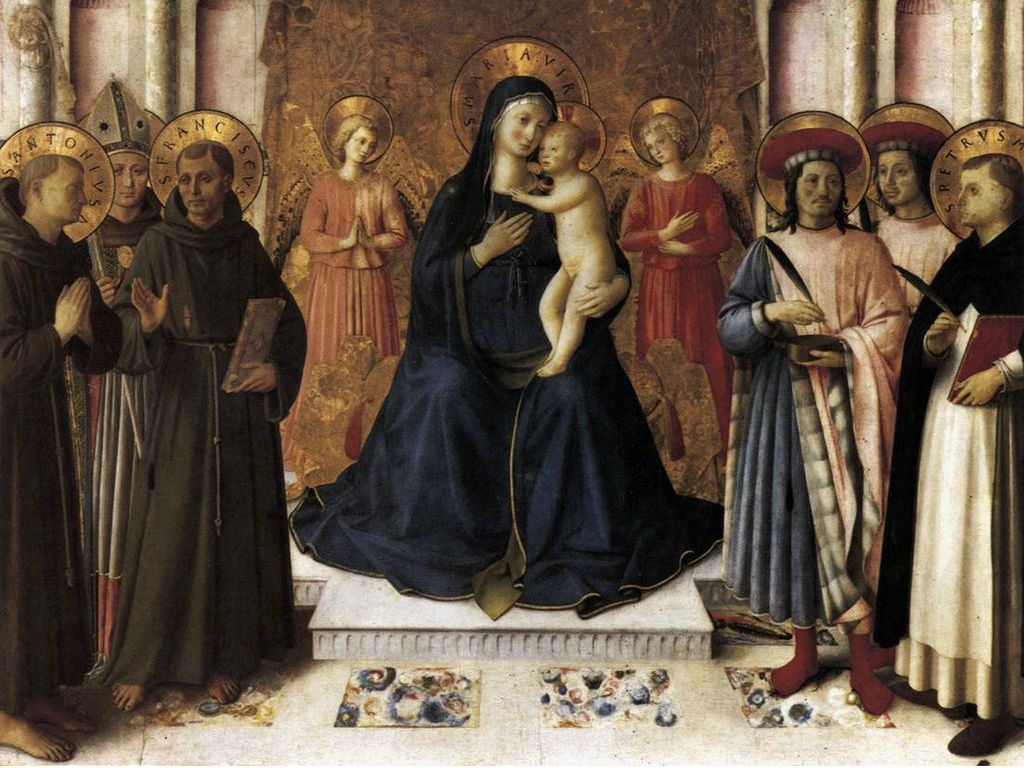 The Convent of Bosco ai Frati is considered one of the oldest in Tuscany.

It was founded before the year 1000 by the Ubaldini family and later donated to the Franciscan friars.

The construction of the convent as we know it is attributed to Michelozzo. The attribution to this artist is not based on documentary sources but on a “literary” tradition that takes place with Vasari in the mid-sixteenth century.

The renovation of the convent, according to Franciscan sources, would seem to be located mainly in the third decade of the fifteenth century, between 1420 and 1429.

On the left side, towards the road, it is still possible to see some blinded mullioned windows belonging to the original medieval church.

The first three bays use the old walls of the previous church, consolidating the side walls with two pairs of sturdy buttresses in correspondence with the fallout of the semicircular transverse arches and the ribs of the new round-headed cruises.

The fourth bay, always square, is a sort of presbytery raised by two steps bordered at the top by a transverse arch. On the bottom a further triumphal arch gives access to the polygonal choir.

The Medici family in Mugello, between art and faith

The Convent Bosco ai Frati in the Mugello as well as being an important place of prayer is also a place of great artistic interest for the works that are preserved there.

it was around the beginning of ‘400, with Cosimo de ‘Medici, the monastery reached its peak: it was entirely rebuilt and enlarged, with the construction of a tower, the cloister and the Loggia designed by Michelozzo, who also changes the Church of St. Bonaventura which is located inside.

In the same period the Medici gave the convent the famous wooden crucifix attributed to Donatello, now preserved in the Museum of Sacred Art adjacent to the Convent, where you can admire objects like books, prints and vestments.

Over the centuries the Convent of Bosco ai Frati has undergone many changes, due to its closure by Napoleon Bonaparte and then by the first Italian government: the Franciscans returned today after restoration along with the church which houses a painting by Jacopo Ligozzi and a fresco of the Florentine school of the first half of the fifteenth century.

The nature that surrounds the Convent

In the municipality of San Piero a Sieve, at the Convent of Bosco ai Frati, nature consists of a series of wet areas scattered within a wood (Bosco ai Ronchi) dominated by oaks.

These wetlands consist of two small ponds, Laghetto ai Ronchi and Laghetto ai Frati, located respectively south-east and south-west of the Convent, by an artificial lake at loc. Poggiolino and from a small puddle fed by a neighboring spring.

From the soil point of view the area is mostly affected by gravel sands and beds and to a lesser extent by pebbles.

In the area surrounding the Bosco ai Frati Convent an itinerary of great landscape value develops and is suitable for walking or mountain biking. The road, always paved, makes it possible to use any bicycle.

The route is of medium difficulty and the uphill sections never exceed 500 meters in length with slopes that can vary from 3 to 7-8%.

The Convento del Bosco ai Frati is located in Lucigliano, in the municipality of San Piero a Sieve, a few kilometers from Villa Campestri Olive Oil Resort.

The Convent is now open to the public:our staff will be happy to provide our guests information on schedules and reservations.

If you want to experience a stay of history, art and nature in Mugello, we are waiting for you at Villa Campestri Olive Oil Resort!