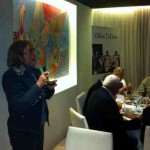 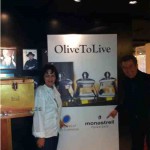 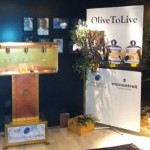 After conquering the U.S., OliveToLive has landed in Spain: on December 1st, 2011 was in fact opened a new Oleoteca® Villa Campestri in Alicante. A dedicated space for the Oleoteca® Villa Campestri has been created in the restaurant Monastrell, owned by Michelin-starred Chef Maria Josè San Roman, famous for her passion for olive oil.Maria Josè San Roman has participated in “AmorOlio” at Villa Campestri Olive Oil Resort last October and here she enjoyed OliveToLive, a patented olive oil storage system invented by Paolo Pasquali for extra-virgin olive oil maintenance under nitrogen and under temperature-controlled. The worst enemies of olive oil are known to be oxygen, light and heat. Every time we open a bottle of olive oil or we expose it to heat or light, the process of decay of its organoleptic and nutritional properties begins. Therefore, after extensive research, Paolo Pasquali, has invented an innovative machine, OliveToLive, that now has landed in Spain.

During the inauguration, which was also attended by Paolo Pasquali, a special dinner with 9 different extra-virgin olive oils prepared by Chef San Roman was served. Brigida Jimenez Herrera, Director of IFAP in Cabra, and one of the leading experts in the world of olive oil has led a wonderful tasting of the 9 different olive oils, explaining their organoleptic characteristics.

Even the spanish Broadcaster RTVV gave space to this news with a beautiful TV Report!

The Oleoteca® of Alicante is our second Oleoteca® in the world after the one in California at the prestigious Culinary Institute of America.

If you love the dishes of our restaurant L’Olivaia, then you cannot miss the opportunity to attend one of our cooking classes to really learn all the secrets of Tuscan cuisine!

If you like lamb then you can’t miss “Scottadito Lamb” from Villa Campestri Olive Oil Resort, a delicious dish that enhances the delicacy of lamb chops.

Scarperia in Mugello: a Dream Village!

Mugello is a Tuscan land located in the Apennine watershed, just a few kilometers from the beautiful Florence. It is a part of Tuscany rich in history and artistic treasures, dominated by intense nature and many beautiful villages. One of these, Scarperia in Mugello!

Mother’s Day is an anniversary felt all over the world, especially in Italy. Since “mum is always mum” discover with us how to celebrate her, with 5 original ideas for Mother’s Day 2020!

To become a good rider it is not necessary to start riding at an early age, this is why horse riding is a sport that undoubtedly attracts everyone. Here are the best places to learn to ride a horse near Florence!

The Mugello Moto GP is one of the most anticipated events for lovers of two wheels. Every year thousands of fans arrive in Mugello from all over the world to follow and support their champion. This year the event could be postponed or canceled and many wonder if the Mugello 2020 GP will be Virtual […]